“It can get bitter on these heights, and the winds, how they blow. There has been many a roaring night Hector and I have thought we would perish on this Hill, but, of course, how could we? What comfort is the hearth fire without raw weather howling outside the door, and what pleasure is there in rest unless the day’s toil was almost more than you could bear?”

“Which were your greatest storms?” I asked.

He furrowed his brow. “We’ve had so many,” he spoke slowly, “and each comes upon us afresh, as if it never had a predecessor. It is a curious truth that I cannot remember the snows here in any particular…at night, it is not these storms that I dream about, but always springtimes and storms below. In my dreams, I forget my century in heaven and recall only my few springtimes on earth.”

Then next day the journey through heat and light to Crystal Peak.

After years of seeing the mountain from afar, from over horizons, I am here.

Silence. Stillness, except my mind.

Oh how I wish I were free.

There, where love awakens, dies the I, dark despot.

Dr. John Archibald Wheeler, contemporary of Bohr, teacher of Feynman and generations of other physicists, died on Sunday.

There is a wonderful tribute to him at Cosmic Variance.

Here is the dedication to his landmark textbook, Gravitation (with Charles Misner and Kip Thorne):

We dedicate this book
To our fellow citizens
Who, for love of truth,
Take from their own wants
By taxes and gifts,
And now and then send forth
One of themselves
As dedicated servant,
To forward the search
Into the mysteries and marvelous simplicities
Of this strange and beautiful Universe,
Our home.

Three days ago Hu Jia (胡佳) was sentenced to 3+ years in prison for his ongoing, courageous criticisms of the government of the People’s Republic of China.

At the recent 2008 TED conference in Monterey, Clifford Stoll ended his wonderful talk with these words inscribed on the Hayes Clock Tower bell at SUNY:

All truth is one.
In this light
may science and religion endeavor here
for the steady evolution of mankind.
From darkness to light,
from narrowness to broadmindedness,
from prejudice to tolerance.
It is the voice of life which calls us to come and learn.

The day conference in Pasadena passed symmetrically, and at dusk I cruised west on the 10 to Santa Monica. I hit Magdelene’s for the only real Mexican food in West L.A, then turned north on PCH.

There was a shabby bar with jukebox I knew, right on the beach, where I could ponder the floating silver coins of moonlight on ocean, and think of that one girl so far away.

If you spend time in surfer hangouts, eventually you’ll find yourself in some kind of confrontation.

The argument started over best Baja breaks. Pounding the bar, I tried to put words to the catch in my heart I felt in every moment at Todos Santos. My buddy droned on about some mush beach I’d never heard of, where he’d “shredded” five or six waves in one storm back in December. He’d met a Reef model there. And oh yeah, the fish tacos were “killer”.

It was all downhill from there. We started arguing about “proof” and the “scientific method” and other gibberish, on and on, inevitably, to number theory.

The bar got perceptibly quieter.

I offered up Euclid’s proof of the infinity of primes -

It was nothing but white-noise-surf-hiss to my friend. I fetched the laptop from the truck and saw the low clouds drifting before the moon. When I walked back in, the jukebox was playing Toulouse Street, and bang….there was that catch in my heart once more.

I asked him to pick a prime, any prime. Madre de Dios, the only one he could think of was 19. Mas cerveza, por favor.

The barkeep served. My friend sieved. In a minute he came up with another prime: 97.

Before we could begin exploring the nether-regions of factoring efficiency he grew sullen, but bought me another Corona.

I left him there at 2:00 AM. He was humming “Flight of the Valkyries” under his breath, and muttering phrases like “Epistemologists don’t surf.”

I drove north into the night, hoping for a new day of green rooms.

Some will sleep, but all shall be changed.

One of my 23 great-great-grandfathers was Samuel Mulliner: immigrant from Edinborough in the early 1800s, polygamous husband of at least five wives, pioneer into some of the wilds of Southern Utah, and participant in an early experiment in social equality called “The United Order”.

He helped lead an emigrant wagon train which started out from Council Bluffs, Iowa in June, 1850, and arrived in Salt Lake City, Utah, on September 26. He wrote on the journey -

The company was organized on the 12th of June by Elder Orson Hyde on the camping ground 2 miles from the ferry above Bethlehem….On the 17th, our whole company camped on a creek about 3 miles West from the ferry where the officers met and passed the following resolution for the intended benefit of the company while journeying to the valley of the Salt Lake:

20 June. We traveled 10 miles, had 2 delays in crossing creeks, met a number of gold diggers returning home, saw 2 graves of our people, several cases of cholera in camp tonight, the case of Alfred Brown serious, one wagon tongue broke and replaced.

22 June. More of Brother Spafford’s children dead, making 3 in one day in the 2nd division.

28 June. A severe storm of rain and thunder in the night…not much water for cattle. A part of our camp not able to come to the camping ground tonight – the 3rd and 5th ten absent. The absentees came up late and for the first time we saw the power of death in our camp. One boy had fallen in a few hours and this morning.

7 July. This morning we had to bury Mrs. Hart. This being Sabbath we would fain have rested, but we had no wood nor water…Three new cases of cholera this morning…

9 July. We are camping on Plumb Creek for the purpose of washing, etc. Captain Maughan’s ten of their division fell behind some days but have come up and camped by us tonight. This captain was very dissatisfied at their slow movement, as he called it of our our camp, but some of his cattle have given out, and he couldn’t keep up. So much for go ahead folks.

11 July. We had a severe storm of rain and wind last night but the Lord preserved us all from danger. Camp in good health. One violent attack of cholera this morning, but means promptly used with the blessing of God it was an instant cure. The medicine used was 2 doses of pain killer in 15 minutes…This day we passed 25 graves….

14 July. In the afternoon when our folks had got along with their cleaning up we went to the river and I baptized and rebaptized some 30 or 40 of our camp. In the evening we had a good meeting, several of our brethren spoke well, a good spirit prevailed and we parted rejoicing.

18 July. Our camp in good health, – feed very scanty. We have passed a great many graves in the last few days mostly buried from the 5th to the 15th of June and mostly from Missouri and scarcely a grave but has been robbed of its contents by the wolves.

1 August. We traveled 12 miles today – had to stop, for an axel tree broke. A number of the Sioux Indians about us – they appear quiet. Smallpox is among them, we hope the Lord will preserve us from that plague.

7 August. We started this morning from 1/2 mile east of the Bend in the road Dead Dry Timber Creek and as the first ten reached near the deep ravine a stampede took place in the 5th ten as they were coming into line on the road. The teams that were running were providentially stopped or who can tell the awful scene that would have taken place in that deep ravine for every wagon would have been found at the bottom of it. Poor Brother Clements lost his life in endeavoring to stop the wagons. William McDonald at the risk of his life, and his horses rode in before the teams and stopped them before they got far enought to scare the front teams. Brother Clements was knocked down by the oxen, who trode on his body, and a heavy wagon passed over his bowels. He lived till toward evening.

19 August. Still in camp – 1 mile from the ford in a heavy cold rain storm, our cattle suffering with cold and hunger.

20 August. This day we saw the Sweet Water Mountains capped with snow.

3 September. We traveled 10 miles today, all well except Sister Blodgett who has been confined. She had a fine Boy – doing well.

26 September. Arrived at our long wished for homes, the City of the Great Salt Lake, making in all 101 days since we started from the Missouri River opposite Bethlehem.

At the foot of the last mountain, where we camped for the last time before we entered the valley, the first fifty were called together for the purpose of settling all difficulties, if any existed, and ask each others forgiveness, so that we could enter the Valley free from any hard feelings towards any of our brothers and sisters.

A good spirit prevailed, and all expressed a desire to forgive, and to be forgiven. 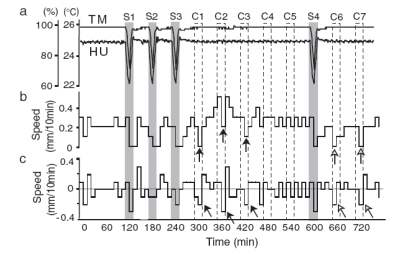 I gave a talk recently in part on the idea that consciousness might arise algorithmically, or from other simple mechanisms. Conventionally, however, we tend to explain intelligence and consciousness as phenomeon rising from aggregations of highly specialized cells, neurons.

The organism is the amoeba Physarum polycephalum, and what you see above is a plot of its speed and acceleration over time.  It is confronted with environment changes (cooler, drier air) at points S1, S2, and S3, at which times it slows.  Notice, however, that significant periodic velocity changes continue at regular intervals in the absence of further environmental changes, at C1, C2, and C3. Note the periodicity matches the original environmental change timing. These velocity changes then appear to subside, until reinforced by a single change at S4, which reinstates the previous behavior.

The researchers speculate that simple nonlinear dynamics explain the behavior. The journal Nature comments, “Like all living organisms, slime moulds have built-in biochemical oscillators, like the human body clock…The team’s calculations show that such a group of oscillators can pick up and ‘learn’ any imposed rhythmic beat, although the knowledge decays quickly once stimulus ceases.”

It is not common to encounter recurrent environmental changes with periods of 0.51.5 h in nature. Thus, some might consider the capacity to learn a periodicity of this kind to be meaningless. However, the opposite conclusion could also be drawn, namely, that the organism is able to remember periodic changes that it has not experiencedbefore. This indicates that the organism has a generalized capacity for learning, independent of the details of the periodicity.

Discerning a periodicity is not easy, even for humans. According to history textbooks, when the ancient Egyptians recognized the regular periodicity of the flooding of the river Nile and succeeded in anticipating the next flood, this breakthrough triggered the invention of the calendar and was a symbol of the dawn of civilization. It is thus remarkable that a single-celled organism can perform such a function.

Others have tried to explain the seemingly intelligent behavior of single cell organisms in terms of relatively simple chemotaxis, and even via quantum mechanical phenomenon in microtubules. Ironically, much work proceeds in trying to understand the collective intelligence (if you can call it that) of phenomenon like financial markets (and other pyramid building), in terms of nonlinear dynamics.